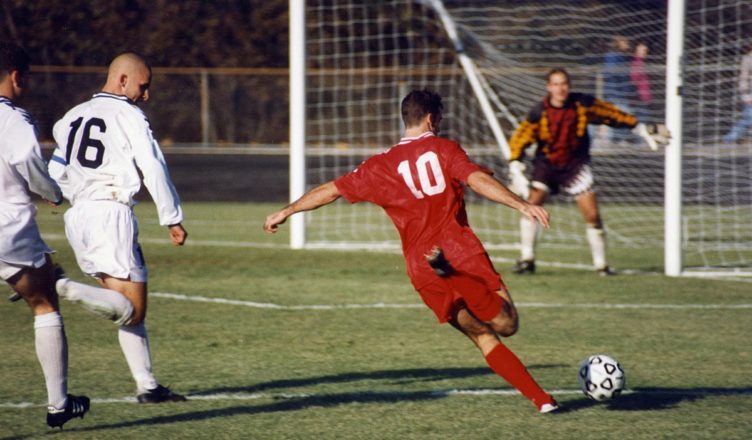 Manchester City announced themselves as champions of the English Premier League after an incredible fightback which saw it score twice in injury time to beat QPR 3-2 and seal the title on goal difference. City’s dreams of a first title in 44 years appeared to be in tatters as 10-man Rangers led 2-1 after 90 minutes courtesy of goals from Djibril Cisse and Jamie Mackie following Pablo Zabaleta’s opener. But as Manchester United prepared to celebrate snatching a 20th league title following their 1-0 win at Sunderland, Edin Dzeko and Sergio Aguero struck twice in two minutes to secure one of the most enthralling title duels of all time. “The last few minutes were incredible. This is for our supporters, they deserve this,” City manager Roberto Mancini said, “To win like this is incredible. I have never seen a finish like this. We had a lot of chances, we deserve to win this championship. It’s fantastic. After 44 years I dedicate this to all our supporters. It’s a crazy season, crazy last minutes.” Relieved City captain Vincent Kompany meanwhile admitted his nerves had been shredded by the frantic finale. “I want to say it’s the best moment of my life – but please never again like today,” Kompany said. “Miracles do happen in Manchester. Only this time it’s on this side of the road.” After a nervy start, City took the lead five minutes from half-time through Zabaleta, the Argentinian fullback darting onto a deft through ball from Yaya Toure to shoot high into the net past Rangers keeper Paddy Kenny. The goal sent relief coursing around Eastlands as City prepared for their championship party.

But Eastlands was stunned into silence shortly after halftime when a blunder by Joleon Lescott let in Cisse who raced clear and thundered an equaliser past Joe Hart. Even then, the force still seemed to be with City, as QPR captain Joey Barton was sent off in an incident that defied belief. The fiery midfielder was given his marching orders by referee Mike Dean for a retaliatory elbow on Carlos Tevez following an off-the-ball clash. As Barton left the pitch, the midfielder then angrily kneed Aguero in the back of the thigh to leave himself facing a lengthy ban. Yet incredibly instead of ramming home their advantage, City were left shellshocked as 10-man Rangers took a 2-1 lead in the 66th minute, Mackie heading in at the far post after Armand Traore’s swift break from defence. Amid unbearable tension, City looked set for a traumatic defeat until substitute Dzeko nodded in to equalise in the second of five minutes of injury time. Then, out of nowhere, Aguero skipped clear of the Rangers defence to spark bedlam at Eastlands with the most dramatic winner imaginable. City celebrated but it was a different story at the Stadium of Light, where for a fleeting moment after the final whistle United’s players believed they had done enough to retain their crown after Wayne Rooney’s first-half goal completed a 1-0 win. But then news of Aguero’s late winner filtered through and United’s players trudged off in disbelief having been all smiles just moments before. “Nobody expected that. Everybody expected City to win, but they did it against 10 men for half an hour and with five extra minutes to help them,” Sir Alex Ferguson said afterwards. “But I congratulate City on winning the league. Anybody who wins it deserves it, because it’s a long haul. At the end of our game our players didn’t actually know the results. “Now, they’re really disappointed, I’m glad to say. There’s no other way they should be … It wasn’t our turn today.” QPR’s fans celebrated meanwhile after the club’s Premier League survival was ensured as Bolton could only draw 2-2 at Stoke. In the other issues to be settled on Sunday, Arsenal clinched third place with a 3-2 win at West Bromwich Albion while Tottenham sealed fourth place with a 2-0 win over Fulham at White Hart Lane. Tottenham, however, face a nervous wait to see if they will advance to next season’s Champions League. A win for Chelsea in next week’s final against Bayern Munich would see Spurs miss out. Chelsea warmed up for next week’s final with a 2-1 win over relegated Blackburn. Elsewhere, Newcastle’s brave challenge for a top four finish ended in a 3-1 defeat at Everton which left the Magpies in fifth place. Liverpool’s disappointing season ended on a downbeat note with a 1-0 loss at Swansea. Get one month subscription free soccer live alert by soccerazzi