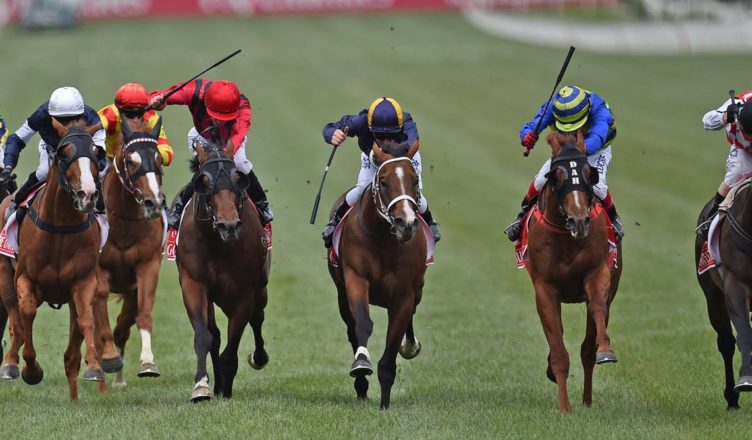 The last two weekends have been interesting ones when it comes to the three-year-old Kentucky Derby Prep races. ; We saw a long shot score at Santa Anita and a maiden win in Tampa. ; Here is round two of the BetAmerica Kentucky Derby Top 15. ; 1. ; ; ; ; ; ; Union Rags 2. ; ; ; ; ; ; Mr. Bowling 3. ; ; ; ; ; ; Gemologist 4. ; ; ; ; ; ; Algorithms 5. ; ; ; ; ; ; Alpha 6. ; ; ; ; ; ; Out of Bounds 7. ; ; ; ; ; ; Junebugred 8. ; ; ; ; ; ; Hansen 9. ; ; ; ; ; ; Creative Cause 10. ; ; El Padrino 11. ; ; Discreet Dancer 12. ; ; Sabercat 13. ; ; Fed Biz 14. ; ; Battle Hardened 15. ; ; I’ll Have Another The biggest change in the Top 15 was the drop of the Bob Baffert-trained Liaison from three to off the list. ; Liaison was the 3-2 post-time favorite in the Robert B. Lewis on February 4 at Santa Anita, but ran like he was 32-1. ; Liaison was probably put too high on the list after his Grade 1 win in the CashCall Futurity and could be better on the synthetics. Even with Baffert losing Liaison on the list the Hall of Fame-trainer gained another in Fed Biz, who won an allowance race last week with ease even though he as green down the stretch. ; Baffert also has Bodemeister who could make his way to the Top 15 after breaking his maiden in stylish fashion this past weekend. The winner of the Robert B. Lewis, I’ll Have Another, makes his debut at 15 on the list after scoring the upset at 43-1. ; Truth be told, I’ll Have Another fit well in the Grade 1. ; He broke his maiden at first asking with a speed figure better that Liaison and was second in the Grade 2 Best Pal to Creative Cause, who is at nine on the Top 15. ;The sixth place finish on the sloppy, sealed track in the Grade 1 Hopeful was a complete throw-out race for the Flower Alley-colt. ; Alpha moved up from eight to five after winning the Grade 3 Withers Stakes over the inner dirt at Aqueduct. ; The Bernardini-colt finally broke well and put himself in a good striking position during the early stages. ; When jockey Ramon Dominguez asked, Alpha responded and won going away. ; Next up for him could be the Gotham and a matchup with Hansen. Ever So Lucky dropped out of the Top 15 due to a late scratching in the Grade 3 Hutcheson this past weekend at Gulfstream Park. ; Trainer Jonathan Sheppard did not want to run his colt over the track, which had taken a lot of rain in the days leading up to the race. ; Even with a fast track it would have taken a top effort to run down Thunder Moccassin, who toyed with the field, winning by just under seven lengths. ; It would appear trainer Todd Pletcher has a crack sprinter on his hands and will likely keep him around one turn. Battle Hardened is another new face to the Top 15 after winning the Grade 3 Sam F. Davis at Tampa Bay Downs on February 4. ; The Giant’s Causeway-colt entered the race as a maiden, but did not run like one. ; Under jockey Julien Leparoux, Battle Hardened sat about three lengths off the early pace and finished well to win going away. ; Prospective finished a good second after being caught five and six wide and could be one to watch in the Tampa Bay Derby with a clean trip. This weekend there are three stakes races that will change the Top 15. ; First up on Saturday the 18th is the El Camino Real Derby on the Tapeta at Golden Gate Fields. ; Sunday Creative Cause is expected to kick off his 2012 campaign in the Grade 2 San Vicente at seven furlongs and on Monday, President’s Day, the Grade 3 Southwest will be run at Oaklawn Park. ; The Southwest will feature Junebugred, winner of the Smarty Jones, as well as Southern California-shippers Secret Circle and Longview Drive. ; Secret Circle and Longview Drive were last seen finishing second and third in the Grade 3 Sham, which was won by Out of Bounds, who sits at number six on the BetAmerica Top 15.